PGA Head Golf Professional Dan Hoban Jr. offers a well-stocked golf shop to accomodate the needs of golfers of all levels. The golf shop partners with major golf vendors such as Titleist, Greg Norman Collection, Footjoy, Ahead,  Ouray, Bermuda Sands, and Monterey Club to stock the shop. Custom fitting and special ordering are available through the golf shop. Hoban is a proud member of Team Titleist/Footjoy as a Staff Partner. All types of golf shop merchandise are available from golf balls, apparel, headwear, outerwear, golf shoes, bags, and equipment.

Hoban returned to Middletown after 10 years as the General Manager/Head Golf Professional at John F. Byrne Golf Club in Northeast Philadelphia. He is a Class A member of the PGA of America and has served as a member of the Philadelphia Section PGA Growth of the Game Committee and Junior Golf Committee and currently volunteers as an instructor with the Philadelphia PGA’s HOPE (Helping Our Patriots Everywhere) Program.   Hoban is a multiple-time nominee for the Philadelphia PGA Junior Golf Leader Award, the Player Development Award, the Patriot Award, the Public Facility Merchandiser of the Year, and the PGA Bill Strausbaugh Award.  Prior to his stint at Byrne, Hoban was an assistant professional at Middletown in 1997 under his mentor Don Beardsley, now the PGA Director of Golf at Queen’s Harbour Yacht and Country Club in Jacksonville, Florida.  Dan began his golf business career at Walnut Lane Golf Club in the Roxborough section of Philadelphia at age 14, where he learned the game from the age of 6.

Hoban is also the head golf coach at Philadelphia’s Roman Catholic High School since 2003, where he is a 1992 graduate and a three-time All-Catholic League Golf selection. His teams have qualified for the Philadelphia Catholic League Championship from 2004-2017 as well as 2018-2021 and the PIAA District 12 tournament 4 times since 2009.  Roman’s match record during Hoban’s tenure as head coach is 203 wins and 86 losses.  Eighteen of his players have been named All-Catholic and 3 have advanced to the PIAA East Regionals and one of his players won the 2016 Philadelphia Catholic League individual title in a dramatic sudden death playoff.  The culmination of “Coach Hobes” coaching career was the recent capturing the Phialdelphia Catholic League Golf Championship by the Cahillites in the spring of 2021.  Two alumni are now PGA Professionals and two are involved in the golf business as assistant professionals or golf course managers.  He also currently is the tournament director of both the Philadelphia Catholic League and PIAA District 12 Golf Championships.  Hoban was inducted into the Roman Catholic High School Sports Hall of Fame in 2007, was one of the RCHS Alumni Association’s 125 Persons of Distinction in 2015, and was inducted into the 21st Ward Sports Hall of Fame in 2013. Dan also played collegiate golf at LaSalle University, where he graduated in 1996 and was the captain of the Explorers golf team under Coach Joe Boyle in his senior year.  Dan now plays in some Philadelphia Section PGA events during the season along with the Atlantic Winter Tour in the off-season. Hoban was named the AWGL Open Division Player of the Year in 2018, 2019, and 2021. The off-season sees Hoban behind the microphone as the “Voice of Roman Catholic Football and Basketball” and Thomas Jefferson University Basketball. He has worked in various behind the scenes roles for Roman’s Basketball program since 1991.  While his days at Middletown and coaching take up the majority of his schedule, he greatly enjoys playing golf with his wife Nonee in Pinehurst, North Carolina or Myrtle Beach.  A former saxophone player including years with the Philadelphia Mummers’ Greater Kensington String Band, Hoban enjoys listening to all varieties of music, especially Chicago, Kenny G and other bands that include horn sections.

“I enjoyed my time at Middletown right after college and I always said that if the opportunity to return there ever came, I would go back. I am ever grateful to my former company president Bud Connors, who selected me to move to Middletown out of college to learn under Don Beardsley, one of the best PGA Professionals around. Fortunately, the chance came to return when the late Rick Begley acquired the club lease and I am extremely grateful that Rick gave me the opportunity and I’ve enjoyed every day since. There are so many great people here at Middletown and working here is truly fun,” Hoban said. 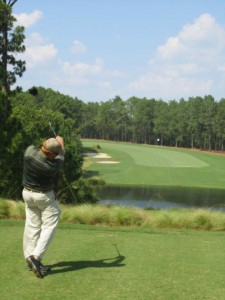 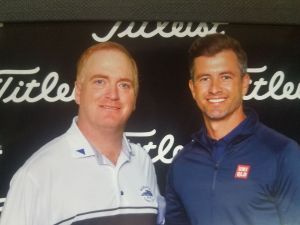 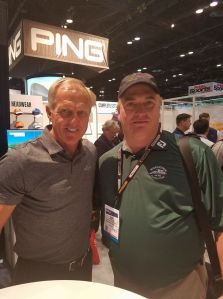 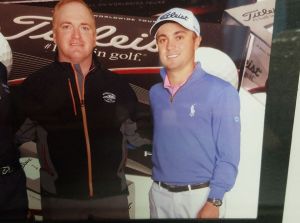 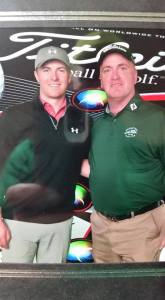 Dan (l. to r.) playing at Pine Needles Lodge and Golf Club in Southern Pines, NC, with Adam Scott, with Greg Norman,  with Justin Thomas, and with Jordan Spieth.